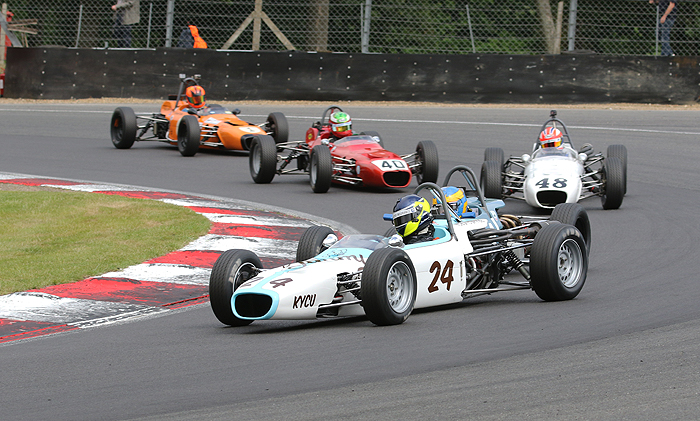 Some of the finest Formula Ford racing from 50 years of the category headlined the Historic Sports Car Club’s Legends of Brands Hatch Superprix weekend on the Brands Hatch Grand Prix circuit (Saturday/Sunday 1/2 July).

Within a full 17-race weekend featuring most HSCC categories, the Club’s special celebration of 50 years of Formula Ford was a key part of the weekend and Formula Ford drivers and constructors from 50 years of the category were there, half a century on from the inaugural Formula Ford race at Brands Hatch on Sunday 2 July, 1967. 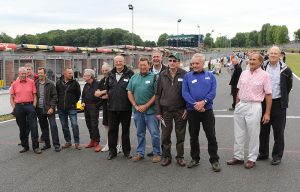 On Saturday Jackson tackled three races on the run, all in different single-seaters, and took a clear Formula Junior win with his Brabham BT2. Benn Tilley led the chase while Mark Shaw (ex-Denis Hulme Brabham BT6) just got the better of Michael Hibberd’s Lotus after a long tussle for third. Justin Fleming’s Lola headed the front-engined cars on the 30-strong grid.

Jamie Brashaw’s Formula 5000 March 73A was just able to out-pace Richard Evans and his Formula Atlantic March 79B in the opening Derek Bell Trophy race. Sunday’s race followed a similar pattern until Brashaw retired with a fuel problem, which left Evans to take a clear victory over Neil Glover (Chevron B37) and Paul Campfield (Chevron B24). 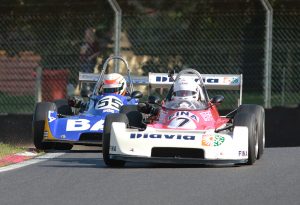 On Saturday, Max Bartell headed the concurrent Classic F3 pack in his ex-Keegan Chevron B34 while fellow Historic FF1600 racer Cameron Jackson was second in his rare Euroracing 101. Bartell added a second win on Sunday when the F3 pack shared the grid with Classic Racing Cars though he had to battle ahead of Richard Trott’s Chevron B43. Martin Anslow’s Brabham BT21 headed the CRC contingent from an elated Lorraine Gathercole (March 712).

A tremendous Historic Road Sports counter fell to Will Plant’s Morgan +8 but only after a spirited contest with the Lotus Elans of Peter Shaw and John Davison. Shaw pushed the Morgan all the way to the flag but Davison lost out badly in heavy traffic and had to settle for third. Shaw was unrelenting as he chased the Morgan home, while in a close finish for fourth Kevin Kivlochan (Morgan +8) just fended off the Lotus 7 of Andy Shepherd.

Leo Voyazides and Simon Hadfield topped the Pre ’80 Endurance podium after a stern challenge from John Burton (Chevron B26) while Richard Piper (March 75S) was third. “A car like this on a circuit like this: just perfect,” said Hadfield of a memorable stint in pursuit of Burton.

Unfortunately the Guards Trophy race ended early after Mark Colman’s Chevron B8 crashed heavily at the top of Paddock Hill Bend. Mark was hospitalised with a broken ankle after an apparent mechanical problem sent the car into the barriers. Charles Allison’s B8 was ahead at the point results were taken though in the early laps before the pit stop window opened, Chris Goodwin (Lotus 23B) battled with the Elva Mk7 of Max Bartell and Ben Mitchell. 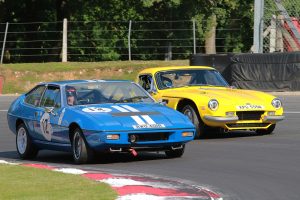 Charles Barter (Datsun 240Z) repelled the Lotus Europa hordes in the 70s Road Sports Championship round and when poleman Will Leverett retired his Europa, James Dean took up the challenge of the Datsun. Up into a tremendous third place came Tom Bradshaw, subbing in the Porsche 928 for Richard Attwood who was busy at Goodwood.

Finally, at the end of the great weekend, Andrew Park added another Classic/Historic FF2000 victory in his Reynard SF81. Leading URS Classic racer Marc Mercer led the chase of the flying Cumbrian while Tom White took third in the Osella after a battle with Graham Ridgway and category newcomer Alex Fores in the Royale RP27 of Tom Smith.