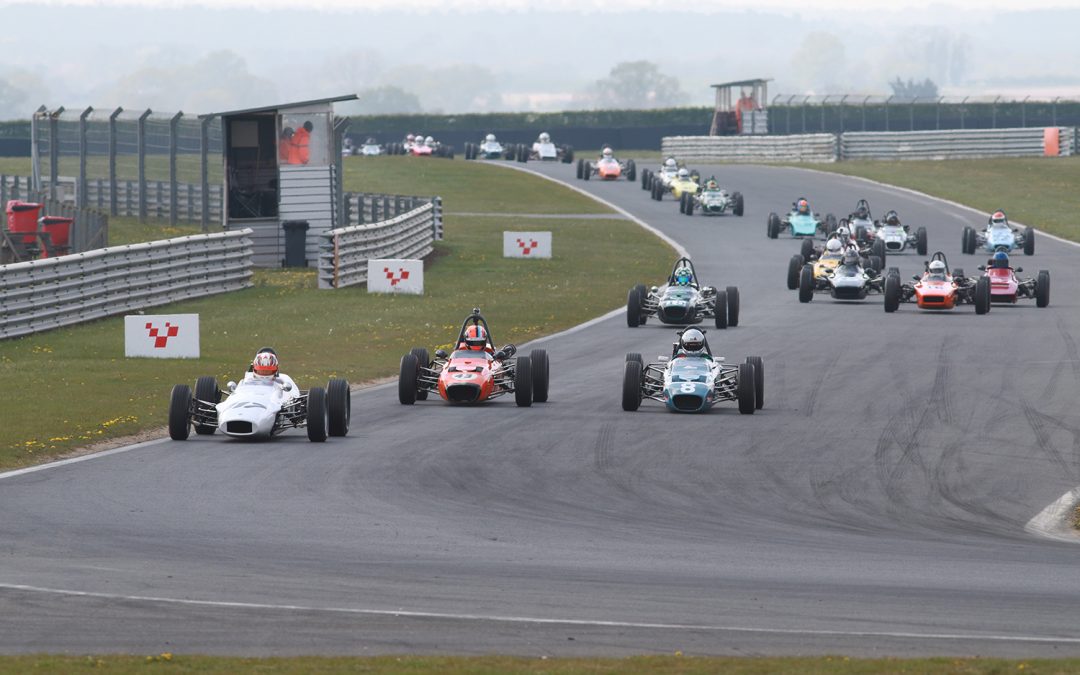 Some epic Historic Formula Ford racing topped the Historic Sports Car Club’s annual race meeting at Snetterton over the weekend (23/24 April). The total winning margin over two races was just one tenth of a second as good weather and few incidents ensured a great weekend of racing.

The opening Historic FF1600 race resolved into a tremendous two-way battle between Tom McArthur in his Titan Mk4 and Callum Grant in his Merlyn Mk20. Initially, Samuel Harrison went with them, but then just dropped away a little as the Speedsport Merlyn lost pace in the second half of the race with a rear suspension issue.

McArthur and Grant are friends as well as rivals and had recently been together on McArthur’s stag weekend in Scotland, so the race was very clean and close. McArthur led into the last lap and Grant thought he’d got a chance at the final corner to out-drag his rival but there was just 63 thousandths of a second in it as they crossed the line, almost side-by-side. Behind Harrison, Matt Wrigley fended off Danny Stanzl and Simon Toyne in a good battle for fourth, while Brian Morris topped the Over 50s in his Lola T200.

The second race finished as an absolute thriller as McArthur and Harrison battled to the line. While Grant slipped back in third with an understeering car, Harrison made up for running wide mid-race to close right back onto the leader’s tail end and dived ahead on the last lap. However, McArthur wasn’t done, and ducked out of the slipstream on the race to the line and just beat his rival by 41 thousandths of a second. Tim Brise topped the Over 50s in Sunday’s race.

Jordan Harrison started the Classic Formula Ford Championship where he left off in 2021 with two more stylish victories. In the opener Harrison got his Lola T544E ahead from the start and stayed clear of an early three-way battle for second. Behind Harrison’s Lola, Richard Tarling, Tom McArthur and Ben Tinkler ran in close formation and ultimately it was McArthur, who worked clear, but the result was in doubt until the very finish. However, with Harrison 12 seconds up the road, the best they could do was battle for second place.

The second race was much tougher for Harrison who had to battle hard to get clear of an early lead contest. By the flag, he had a handy margin over Tarling who tigered clear of Tinkler while MacArthur took a five second penalty for exceeding track limits and finished sixth. 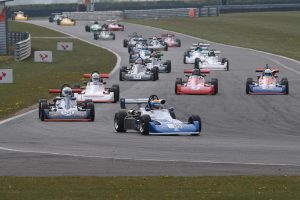 On Saturday Benn Simms made it three in a row in Historic Formula Ford 2000 with another classy win to back-up his Brands Hatch double. Once again, he got off the line best and broke away a little on the opening lap. But Graham Fennymore chased very hard and was a constant threat until his Reynard suffered a broken front wishbone, which left him struggling to keep the car on the track as he slipped down to finish ninth after a slow final couple of laps. That moved Cam Jackson up into second on his category debut in the Simon Ayliff Delta T80, while a fine third went to Ben Glasswell, who saw off Graham Ridgway, Ben’s father Stephen and Greg Robertson for the rest of the top six places.

Sims then made it four from four in the second Historic FF2000 race as Fennymore had to battle through from a lowly grid position. While Fennymore worked his way up to second Jackson was an early retirement with electrical problems and Ben Glasswell also went out with a worsening misfire. Instead, up to a fine third came Greg Robertson on his first outing of the season with Lee Bankhurst taking fourth from Graham Ridgway.

It was a 1-2-3 on the road in the opening Historic Road Sports race for the RW Racing Services squad as Kevin Kivlochan just kept his AC Cobra ahead of the Morgan Plus 8s of Richard Plant and John Shaw. Plant came closest to the Cobra and was well in contention on a number of occasions, but always just lost out when the power kicked in. Shaw knew that third was his target but was unfortunately later excluded from the results. So Chris Merrick, on his Snetterton debut, moved up to a fine third overall and best of the smaller-engined cars in his Lotus Elan.

From a reverse grid on Sunday the result was the same, with Kivlochan battling through to just edge clear of Plant while Shaw dropped some way back in third and Merrick again headed the less powerful cars in a fine fourth.

Series newcomers took the headlines in the opening round of the Historic Formula 3 Championship with young Samuel Harrison taking an impressive debut win in the Speedsport Chevron B15.

At the start, it all went wrong for poleman Ian Bankhurst who simply couldn’t see the lights with a relatively low sun and was virtually last away. Bankhurst quickly set about making up lost ground and was soon up to third, as Harrison set a searing pace from Simon Armer’s March 703. Before long Bankhurst was up to second as Armer struggled a little with pace. However, Harrison was too far up the road for Bankhurst to make any real in-roads. 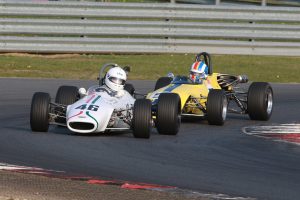 Fourth place was the subject of a wonderful battle between two more category newcomers as Josh Sharp and Mike Lamplough raced wheel-to-wheel for the entire 20 minutes and traded the place numerous times, with Sharp just ahead when it really mattered.

On Sunday, it was Harrison who was slow away but he was quickly able to close down Bankhurst and move ahead to complete an impressive double victory in his first taste of Historic F3. They went well clear of third placed Armer while Simon Haughton took fourth as Sharp and Leif Bosson battled mightily for fifth with Sharp taking the place by a tiny margin.

A rapid start from Howard Payne put his Lotus Europa ahead in the 70s Road Sports race but local ace and poleman Jeremy Clark quickly asserted his authority with his Lotus Elan and rushed off into the distance to win by more than half a minute. Payne was able to keep Charles Barter’s Datsun 240Z back in third as Nic Strong took fourth as Adam Bagnall made his seasonal debut to grab fifth in his Jaguar E-type. Gary Thomas and David Tomkinson battled for Class E honours and the final top six place and after 25 minutes of flat out racing, Thomas took the place by less than a second.

Historic Touring Car wins were shared by Mike Gardiner and Jack Moody, even though Moody had been forced to retire his Lotus Cortina from the opening race with a gearbox issue. That left Moody at the back of the grid for the second race, but he was able to storm through and win convincingly as Gardiner hit problems and retired. Up into second place in race two came Kevin Kivlochan in his ex-Alan Mann Ford Mustang to give the car an impressive debut in his hands.

The weekend was wrapped up by guest races for the Monoposto formula, Ecurie Classic Racing and the Classic and Modern Motorsport Club, which all added further to an excellent and smoothly run race weekend at the East Anglian track.