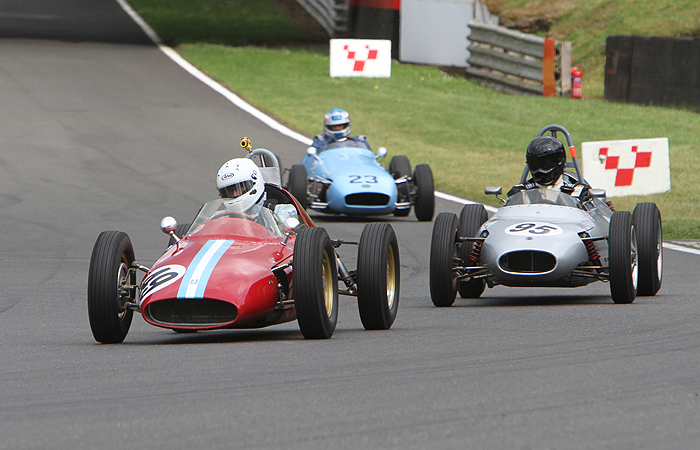 Star drivers from the history of the category along with over 100 Formula Junior cars in action will make the ‘Legends of Brands Hatch Super Prix’ (1-3 July) a milestone event in the Formula Junior Diamond Jubilee celebrations.

The event is part of the three-year Formula Junior Diamond Jubilee World Tour, which builds to a conclusion in 2018. The Brands Hatch GP circuit weekend will include three races for Formula Juniors covering front-engined cars, rear-engined drum-braked cars and rear-engined disc-braked cars. A category record entry of more than 100 cars is already confirmed.

As well as the three races on Saturday, category prime-mover Duncan Rabagliati has invited a raft of drivers and constructors from the Formula Junior story and many of them will be at Brands Hatch. Period drivers on hand will include Kurt Ahrens, Sir John Whitmore, David Piper, Peter Proctor, Hugh Dibley, Roger Nathan, Bill Bradley and Mike Anthony.

Meanwhile, former Grand Prix driver Howden Ganley, patron of the Diamond Jubilee, will be re-united with the futuristic Gemini MkIVA he raced at Brands Hatch in 1963. The car is now owned and raced by Jan Gockmann from Germany.

Pauline Hailwood, widow of Mike, will present the Mike Hailwood Trophy to the winner of sector two of the Formula Junior Diamond Jubilee World Tour. The trophy is one that Mike won in a Formula Junior race at Mallory Park in 1963 in his Brabham BT6. The Brands Hatch races are the third and final element of sector two after races at Pau (21/22 May) and Monza (18/19 June).

“We’ve never had this many cars running at one event before,” said Rabagliati. “We had over 90 cars at Brands Hatch in 2008 for our Golden Jubilee. I’m very pleased that we will have some famous names from the Formula Junior story joining us at Brands Hatch to make it a truly special event in our Diamond Jubilee celebrations.”