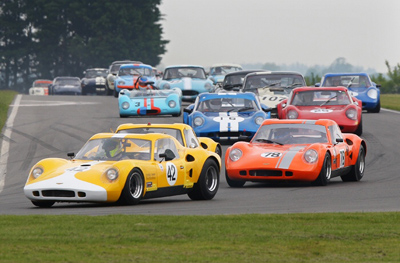 Nick Fleming was the star of the weekend during the Historic Sports Car Club’s annual race weekend at Snetterton (1/2 June) with another victory in Autosport Three-Hour race.

The Scot raced his Chevron B8 solo to repeat his 2012 single-handed victory and wrap up a hat-trick of wins in the race that re-creates one of the Norfolk track’s most popular events of the 1960s.

However, Fleming had to push hard for his success as Neil Burroughs, another hard-charging solo Chevron B8 racer, was less than 14s adrift at the flag after 79 laps of the Snetterton 300 circuit. Another Chevron B8 in the hands of Charles Allison and Philip Nelson completed the overall podium, while a fine fourth and winner of the GT category was the Jaguar E-type of Chris Scragg and Matt Nicoll-Jones.

Peter Shaw (Lotus Elan) fended off Justin Murphy (Ginetta G4) for Historic Road Sports victory, while the second race was run to a handicap format and delivered a win for the Austin Healey Sprite of Peter Chappell. Meanwhile, the pair of 70s Road Sports races delivered two thrilling finishes between Oliver Ford (Lotus Europa) and Richard Plant (Morgan Plus 8). Ford won the opener by 1.4s, but Ford retaliated later to win the second race by just four-tenths of a second.

Jon Milicevic took a brace of Formula Junior wins in his Cooper T59, but young Jack Woodhouse (Lotus 20/22) kept the pressure on his more experienced rival and was never more than a couple of seconds adrift. It was a similar story in the opening Historic FF2000 race as Nelson Rowe headed Callum Grant by a second. Later, with Rowe posting an early retirement in his Reynard SF79, Grant took a debut category win in his dad’s Delta T78.

Mark Charteris was in great form as he took both Classic Clubmans victories in his Mallock Mk20/21 while Ian Jones and Antony Ross shared the Classic Racing Car spoils in their Lotus 59s. In Classic F3, Graham Fennymore (Ralt RT3) and Simon Jackson (Chevron B43) took a win apiece.

Finally, yet another promising young racer is emerging from the ranks of the HSCC in the form of 17-year-old Sam Mitchell who saw off a strong Historic FF1600 pack to win twice in impressive style.

The HSCC season continues over the weekend of 13/14 July with another highlight of the season, the Historic Super Prix on the Brands Hatch Grand Prix circuit.