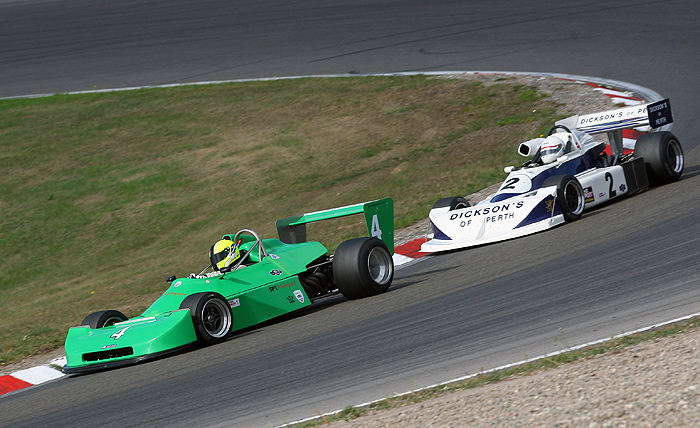 For rounds 7 and 8 of the 10-race season, a fabulous field of 26 cars gathered at the Dutch track for the second running of the major historic racing festival. The event organisers were rewarded by good weather and a huge crowd, estimated at more than 40,000.

Watts and Fleming marked themselves as the pacesetters for the weekend by heading the qualifying times with Watts taking pole by six-tenths of a second. Next up were the Chevron B34Ds of Philip Gladman and Neil Fowler as Andrew Smith (March 742) and Steve Allen (Chevron B25) completed the top six. Tim Barrington (Lola T240) headed Robert Simac (March 712M) in the 1600cc F2 class while Daryl Taylor (March 78B) topped the class for Formula Atlantic cars.

The first of the two races was won by Fleming (Ralt RT1) with Watts (March 722) a close second, less than a car’s length and three-tenths of a second behind after a race-long battle with the Scot.

Fowler took third, but was lucky to finish when a rear wing mounting broke on the last lap. An on-form Mark Dwyer (March 742) was fourth from Smith, while Simac won class A from Barrington by little more than a quarter of a second after another very close contest.

In the second race Watts took control from the start and although Fleming was never far behind he just couldn’t get close enough to challenge for the lead. Smith made an excellent start to lay the foundations for a podium finish as Fowler retired.

Jamie Brashaw (March 782) moved up to fourth as Philip Hall (March 752) and Hugh Price (Chevron B42) rounded out the top six. Barrington took over the 1600cc F2 class win after Simac was penalised for a yellow flag infringement and Bob Sellix (Lyncar 005) completed a double class win in the Formula Atlantic category to take the overall championship lead.

The Historic Formula 2 Championship season will conclude with two races at Dijon in France on 5/6 October.