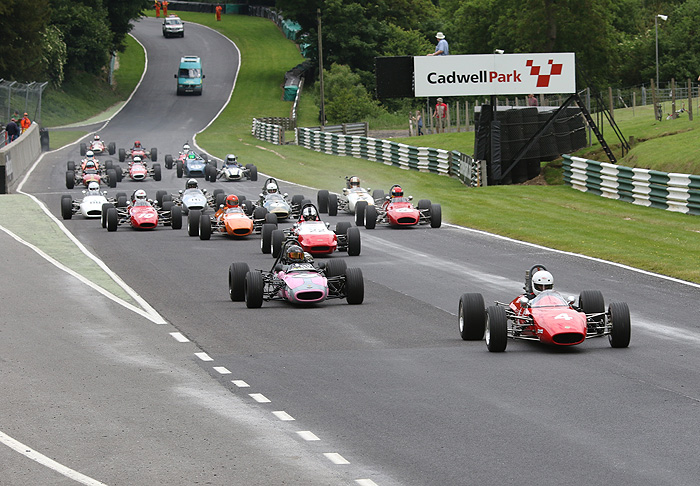 Notable winners in the pair of Historic F3 races were James King, who won on his return to the track 38 years after winning a round of the British Formula 3 Championship, and James Denty who won in the ex-Mo Nunn Lotus 41 on the car’s racing return after more than 20 years in storage.

The opening race for the HSCC Historic Formula 3 Championship featured a great lead battle between Denty and Dean Forward (Tecno) which only ended when Forward was slowed by a rear puncture and forced to retire to the pits. In their wake, Simon Armer (March 703) just got the better of King (Chevron B17) as the American racer made his first visit to Cadwell Park since 1977. From a three-car lead battle in the second race, Forward and Denty both had spins and King came through to win from Armer. “It’s a lovely track, but 1977 was a long time ago,” said King.

Benn Simms was another driver to make it a weekend double in the Historic Formula Ford 2000 Championship in his Reynard SF77. However, in both races he was pushed hard by Tom Smith (Royale RP27) as Andrew Park (Reynard SF79) and Callum Grant (Delta T78) ran close behind and took a final podium position apiece.

Simms made it an even better weekend at the end of Sunday’s programme when he took his rare Elfin 600 to victory in the second Classic Racing Car Championship race. Ian Jones (Lotus 59) won the first race by just half a second but Simms went clear in the second race.

There were four Formula Junior races for the Silverline Championship as the front and rear-engined grids had their own double-headers, with the rear-engined cars racing for the Barry Westmoreland Trophy. Stuart Roach (Alexis Mk2) and Sam Wilson (Lotus 20/22) each won twice, although Wilson was chased hard in the opening race by James Claridge (Lola Mk5A). Roach doubled up by racing his Alexis Mk4 in the rear-engined races and bagged two third places to wrap up a very good weekend.