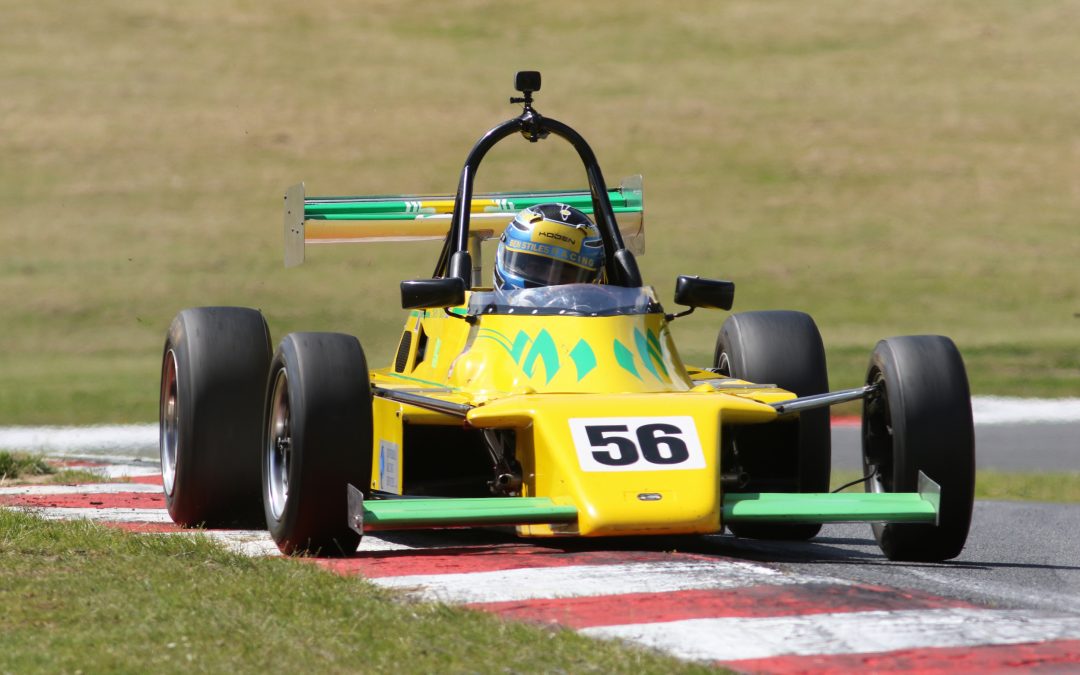 This feature first appeared in the HSCC magazine, Historic Racing, in the summer of 2019.

In our latest feature on essential safety matters, we take a look at roll-over protection in single-seaters. Our thanks to scrutineer Nigel Edwards for the notes on the regulations.

It really goes without saying that a roll hoop that meets Motorsport UK regulations is an absolute essential before any period single-seater takes to the track. But it worth re-stating the requirements as a reminder to everyone and as a pointer to the checks that our scrutineers will make before and during race meetings.

The requirement for a vertical clearance of 5cm (2”) between the top of the roll-hoop and the top of the helmet has been in the MSA / Motorsport UK yearbook safety regulations for at least 30 years (currently p164 K 1.6.4):

(a) An effective roll bar must be fitted with its top edge not less than 5cm above the helmet of the normally seated driver.”

and similarly in the FIA Appendix K (currently Sub-Appx.VI Art.3.4).

“3.4. It is mandatory that where a ROPS is installed in an open car, it must be a minimum of 50mm above the top of the Driver’s and Co-Driver’s helmets at all times.”

It was recently brought to the attention of one of our scrutineers by a continental Race Director, sitting in front of his circuit observation screens, that several single-seater drivers were flouting the 5cm clearance regulation, which could be seen clearly in those screens that looked at the cars from the straight-ahead position. The scrutineer was asked directly to raise this with the relevant miscreants, which happened and adjustments to seat padding and so on were just sufficient to satisfy him that time.

Your scrutineers try their best to help competitors remain compliant within the safety regulations and hence not have to report them to the Chief Scrutineer and Clerk-of-the-Course, which would probably lead to exclusion from further participation at that event. Please help them before you arrive for the meeting by checking this eminently sensible (and long-standing) dimension yourself and rectifying it if necessary.

In addition, it appears that not everyone is aware that upward extensions added to roll-hoops are not acceptable. This was highlighted in the MSA/Motorsport “Competitor Guidance” document “Roll Over Protection Systems (ROPS) for Single-Seater Racing Cars” issued in April 2017:

“We are aware that there are many Single-Seaters that have at some point had their ROPS extended, most commonly by addition of a hoop on top of the original main roll bar. Please note that such extensions have never been catered for in MSA regulations.”

“1.3.1. Main, Front and Lateral Roll-bars. These frames or hoops must be made in one piece without joints.”

“Extensions added above the main structure to increase the height are forbidden unless covered by an ASN or FIA roll cage certificate.”

Formula Junior racer, and former leading hillclimber, Chris Merrick was unfortunate to test his roll over protection at Dijon last June during a Lurani Trophy race. His Cooper T59 was inadvertently caught in a pincer moment and flipped over after a tangle of wheels, landing heavily upside down before flipping back onto its wheels. Thankfully, Chris was completely unharmed and says that was due to his roll hoop and HANS device both doing their job perfectly.

“I accept that there could be the odd situation where HANS is detrimental, but in 99% of incidents they are a benefit. This was very much evidenced by my incident at Dijon. There is no question that it helped tremendously because I came out of it without any neck damage or any issues at all.

“When we bought the Cooper, though they are quite strong chassis anyway, the first thing we did was look at the roll bar height and construction. I’m 6ft1” so it is always difficult to find a racing car that I fit. With the help of Stuart Roach we spent a lot of time on the design of the roll bar and thank goodness we did. It is a good sturdy bar.

“Really importantly, another lesson we’ve learned, is that with seatbelt stretch to have the roll bar to the regulation 50mm above the helmet is so important. In my roll at Dijon my crash helmet touched the ground and I’m more than 50mm below the bar when strapped into the car.

“Any motor sport can be dangerous and you think back to some of the things that happened in period. We’ve got to mitigate against that because most of us are amateurs and friends and we have to look after one another. Roll bar height is just so important.

“I don’t currently wear arm restraints in the car. When my car landed upside down, the instinct was to put my arms down and I did. But thank goodness I didn’t come away with any arm injuries. My hands were flat on the ground at one point as the car landed and that’s another lesson for me. I will now experiment with, and doubtless use, arm restraints. They are mandatory in America but not very common in the UK.

“Your brain tells your arms to do something which you really don’t want to do, but it is an automatic reaction. I was completely unscathed, just a bit of a bent car.”