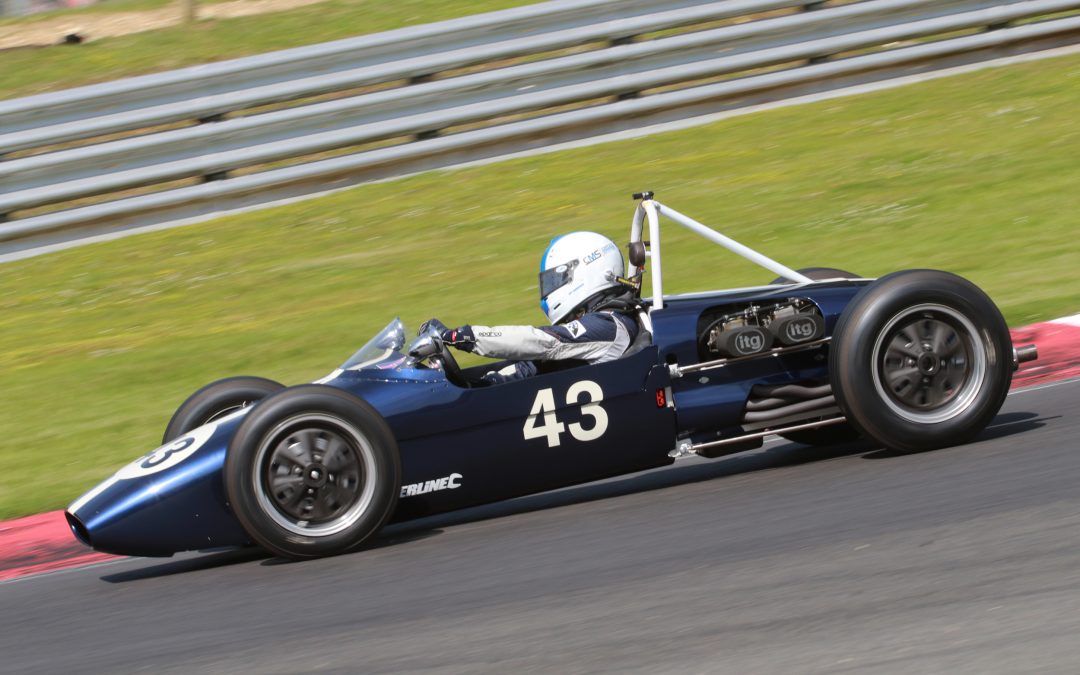 This feature first appeared in ‘Historic Racing’ in the summer of 2019. We thought it was worth running again.

Over recent years, there has been a growing move to make Frontal Head Restraint (FHR) devices mandatory across much of the sport. We look at the reasons for using FHR and offer some outline advice for drivers.

In the UK, FHRs are mandated for circuit racing in cars produced after 01.01.77 and recommended for cars built before 31.12.76. The Club view is that FHRs are encouraged for pre ’77 cars as serious injury can be prevented in the event of even a modest impact. Of course, before we go any further, it goes without saying that the best advice comes from the specialist racewear and equipment suppliers.

The HSCC has a partnership with Vital Equipment offering discount arrangements, and Demon Tweeks also offer a discount for members. Personnel from Vital attend all HSCC race meetings and are always happy to offer advice and guidance. Vital supplies the Schroth, Stand 21 and Simpson Hybrid Ranges. Prices start from around £200 and go up to £1200. It is not advisable for your safety and comfort to wear and install an FHR at the last minute or in very short time, especially without the assistance of an FHR professional. Please also remember that Motorsport UK-licensed scrutineers are an invaluable source of experience and the HSCC team will be happy to talk about FHR devices.

Head and Neck Support (HANS) has been the big safety topic of the last 15 years. Virtually unknown at the turn of the millennium, the Frontal Head Restraint (FHR) system is now as accepted a safety device as a helmet or fire-retardant race suit. The use of an FHR has protected many racing drivers from serious injuries or even death.

The FHR reduces the risk of basilar skull fracture or muscle stretching during an intense deceleration, the primary cause of death in motor racing. Two out of three drivers now purchase an FHR, whether is it compulsory in their racing series or not.

The development of the FHR has its origins in NASCAR racing in North America. Adam Petty, Kenny Irwin, Tony Roper and Dale Earnhardt Sr were all killed when their vehicles collided head-on with a retaining wall, causing a fracture to the base of the skull. Some believed this type of injury was due to the driver’s head being left unsecured in the car while his body is strapped securely to his seat.

This prompted six NASCAR drivers to try out a new device called the Head and Neck Support (HANS) system at the 2001 Daytona 500. The device was developed by Dr. Robert Hubbard, a professor of engineering at Michigan State University, and his brother-in-law, former IMSA car driver Jim Downing. The HANS device was designed to reduce the risk of injury caused by unrestrained movement of the head during an accident.

Downing wondered what could be done to avoid such tragedies. In response, Downing and Hubbard, who earned his Ph.D. in engineering studying the mechanical properties of skull bones, invented the HANS device.

How do they work?

The FHR device is a semi-hard collar made of carbon fibre and Kevlar, and it is held onto the upper body by a harness worn by the driver. The device weighs a little over half a kilogramme.

The FHR uses a raised collar and two polyester-fabric tethers to secure the driver’s head. The driver’s shoulder belts hold the tall, stiff collar securely in place. The tethers link the sides of the driver’s helmet to collar anchor points. When G-loads build during a forward impact, the FHR device ensures that the driver’s helmeted head moves with his or her torso, so that vulnerable neck and skull bones aren’t overloaded.

Even in a relatively slow (35mph) impact with a solid wall, the momentary deceleration can be as high as 25g, making a driver’s head and helmet weigh about 250kg for that instant.

Unfortunately, it was only after a very high-profile tragedy that FHR gained wide acceptance. Hubbard says that through the 1990s, only 250 or so units were sold. But following Dale Earnhardt’s death in the 2001 Daytona 500, 250 FHR devices were sold in one week. Today, more than 140,000 have been sold worldwide.

Snell recommends replacing competition helmets every five years. FHR devices are made with similar materials and resins and are exposed to similar environments. Snell’s five-year rule for helmets is only a guideline, but it should be considered when reviewing the integrity of an FHR device.

When fitted, the FHR tethers offer a great deal of mobility while still reducing the chance of injury. In an impact, the FHR will remain stationary with respect to the shoulder belts, while the driver’s body slides forward until the tethers straighten. The slack in the tethers is taken up before the belts restrain the torso, the FHR, and the head together.

What is right for you?

Before buying an FHR device, work out what you need it to do. Is it for single use with one car? Or do you drive multiple cars, in which case a hybrid device might suit the driver better. The latest hybrid devices operate in a different way to achieve the same objective and are particularly relevant to drivers who race in more than one car on a regular basis.

Racing in UK and Series run under Motorsports UK (MSUK) Regulations: this is covered by the regulation Q 10.1(e) on page 278 of the MSUK ‘Blue Book’, as follows:

“An FIA approved FHR device, fitted in accordance with K.10.4, is Mandatory for drivers in Circuit Racing. With the exception of Period Defined Vehicles for which it is recommend.”

“Period Defined” vehicles are defined on page 57 of the Blue Book, which states that they finish at 31 December 1976 (the same end-date as FIA Period HR).

The helmet must have either an FIA label saying that it is compatible for use with a FHR (HANS) device or have a SNELL SAH2010, SNELL SA2015 or SNELL 2020 orange label (see Blue Book page 177).

The tether pillars on the helmet must have the correct FIA numbers engraved on them:

Finally, please note the relatively new (initially 2018) regulation K 10.4.1 on p170 of the Blue Book about the requirement for a MSUK rectangular blue label:

MSA/Motorsport UK approval stickers, for which a fee of £2.50 is charged, are printed on foil, and once individually affixed, cannot be reapplied.”