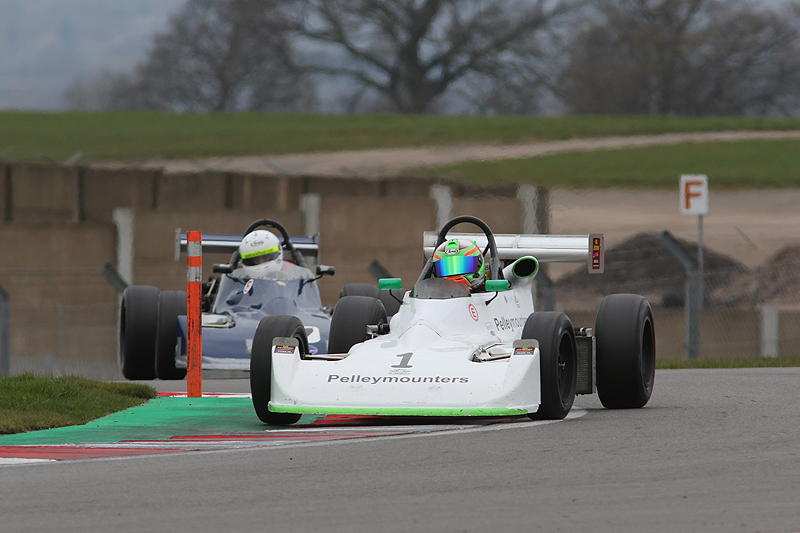 The 2018 racing season from the Historic Sports Car Club got off to a fantastic start at Donington Park over the weekend (April 7/8). From a busy 15-race programme, the Historic Formula Ford pack delivered some epic racing as good battles ran across all categories.

In the weekend’s second Formula Ford championship race Richard Tarling somehow got to the flag first after a race that finished with two seconds covering eight cars. Cameron Jackson and Ben Mitchell joined the current champion on the podium as a fifth of a second covered the first three cars over the line. It was a simply stunning race that thrilled onlookers as the pack went wheel-to-wheel and sometimes three-abreast. 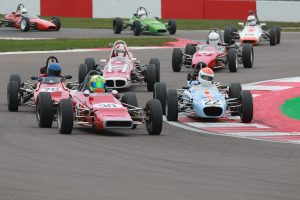 Saturday’s championship race was very good indeed after Mitchell finally wriggled clear of the pack to take a superb win from Nelson Rowe as Tarling, Callum Grant and Jackson fought tooth and nail over third. “I didn’t get a great start and the first lap was pretty busy,” said Mitchell. “But everyone was racing fairly.”

Each day featured a qualification race to ensure that all competitors had at least two 20-minute races and Harvey Sykes took a commanding win on Saturday from Chris Stuart and Kevin Stanzl in an all-Crossle podium. On Sunday, Ben Tusting raced through to beat Rob Smith by a whisker with Greg Thornton’s Titan Mk3/4 in third.

Not to be outdone by the FF1600 pack, the Historic FF2000 season got off to a flying start with a double win for reigning champion Andrew Park over an excellent 30-car field. In Saturday’s opener, Nelson Rowe was down in 14th on the grid after brake problems in qualifying.

Park set a fearsome early pace with Benn Simms right on his tail. “Benn was giving me a hard time,” admitted Park. Sadly, Simms was destined not to finish as a failing rear upright finally gave way and his race was over. Meanwhile, Rowe was making very strong progress in an attacking drive and jumped into second once Simms parked up.

On Sunday, Park was again in stunning form and held Rowe at arm’s length over the early laps and then eked out a winning margin of four seconds in a truly impressive performance.

Charles Barter opened his 25th season of 70s Road Sports with yet another victory in his Datsun 240Z, but only after overcoming a self-inflicted handicap. “I went from first to fourth off the line,” admitted Barter as the 33-strong field crawled all over the Datsun.

Once into his stride, Barter deposed the Morgan Plus 8 of early leader Russell Paterson to take the lead, but the Scot kept the pressure on Barter all the way home and was little more than a second adrift at the flag. The Lotus pack was headed by James Dean and Howard Payne who made it two Europas in the top four.

There was a Lotus victory in Historic Road Sports when John Davison took his Elan clear of a mighty Morgan battle for second. “I was keen to get ahead of the Morgans straightaway,” said Davison. Richard Plant recovered from a slow start to chase back up the similar Plus 8 of Kevin Kivlochan and for lap after lap the rumbling V8s made a wonderful spectacle as they ran in close formation. “He was in my mirrors all the time,” said Kivlochan, who held on to second place. “It was fantastic: a really close race.” 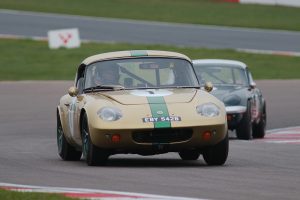 The names of Schryver and Hadfield at the head of the hour-long Guards Trophy race in a Chevron B6 had a familiar feel. However, this victory went to the junior team as their sons Will Schryver and James Hadfield scored an emphatic victory despite an incredibly slippery track. Will Schryver turned in a nicely measured opening stint to work clear of the other Chevrons and James Hadfield, racing the B6 for the first time, completed the job. “It was lads not dads for this one,” said Schryver.

Despite sitting in a puddle of petrol and suffering a mid-race spin, Gregory Thornton ran his B8 to second from early leader Charles Allison and John Davison’s Lotus Elan 26R headed the GT pack as the TVRs failed to reach half-distance.

Jon Milicevic (Brabham BT21B) twice topped the Historic F3 pack but had to contend with a big challenge from the recovering Andrew Hibberd in the opener. After a quick spin into McLeans Hibberd was straight back up to second and hunted down Milicevic on a track still oily from the Guards Trophy race. The final laps were wheel-to-wheel but Milicevic was ahead by just eight-hundredths of a second when it mattered. Into third went a jubilant Ian Bankhurst in the rare Alexis. “Those two are in a different league,” he said on the podium. No one was more disappointed than Milicevic when Hibberd dropped time with an Old Hairpin spin in the second race as light rain made conditions tricky. 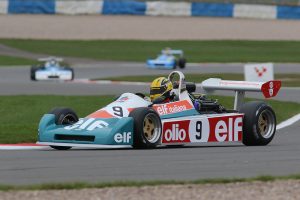 Lee Cunningham (Dallara 381/382) blitzed both Classic F3 races in the car from Edginton Racing. The former FIA GT racer won from the front in the largely untried Dallara as Keith White (Ralt RT1), Pat Gormley (Safir) and David Thorburn (Ralt RT3) battled over the other podium places. Chris Levy and Drew Cameron were the best of the concurrent URS Classic FF2000 pack.

Philip House mastered the Historic Touring Cars on only his second race in his Lotus Cortina but Oslo-based Martin Strommen was a constant threat. An inspired Steve Platts spent the first half of the race bravely chasing the Cortinas. Eventually, the Singer Chamois dropped back a little but still scored an impressive third place overall.

Finally, Sam Wilson (Lotus 20/22) had little trouble in scooping Historic Formula Junior spoils although Peter Morton was still chasing hard at the flag. Morton worked ahead of James Murray in the early laps and closed to within three seconds of Wilson in the closing stages. Alex Morton made it a good day for the family by taking front-engined spoils in his Condor and lost regular sparring partner Nick Taylor (Elva 100) to a gravelly spin at the chicane.