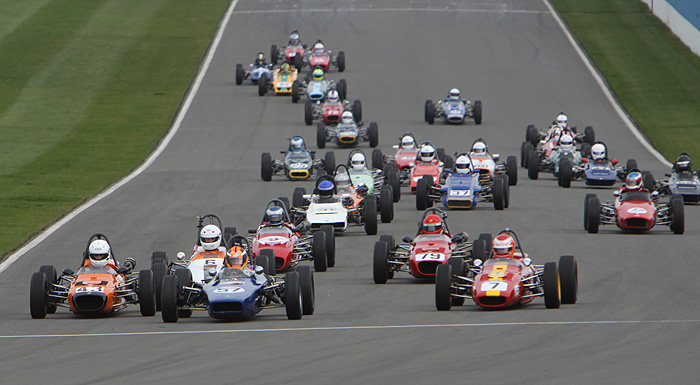 With an entry of 250 cars, the Donington event will get the HSCC season off to a fabulous start, with the grid for four of the eight races full to capacity.

Back in 1933, local enthusiast Fred Craner arranged the widening and surfacing of the motorcycle track in the grounds of Donington Hall. The work was completed at a cost of £12,000 and Britain had its first parkland track. The circuit opened to four-wheel action on Saturday 25 March 1933, when a field of 850cc cars started from a Le Mans-type start. This was the first of six races at that inaugural meeting and the race was won by ER Hall in an MG Midget.

Eighty years later, a fabulous entry from the HSCC will get Donington’s 2013 season off to a flying start and the Historic Formula Ford Championship opener is set to be an absolute thriller with at least 10 potential winners in a capacity field.

Former champions and race winners dominate a sensational entry, which includes a new chapter in the contest between Benn Simms and Bill Coombs. Previously they have battled in Classic F3, but will now go head-to-head in Historic Formula Ford as Benn has leant Bill a car! With Benn racing his newly-restored Jomo JMR7, Bill will race the Alexis Mk14 that Benn raced last season!

So large is the entry for the opening round of the Guards Trophy that some cars have been split off into the Road Sports races to ensure everyone gets a race.

Nick Fleming starts the defence of his 2012 title in his Lotus Elan in a field that includes half a dozen Chevrons and a gaggle of 1960s sports-racing cars from Crossle, Lotus, Lenham, Elva and Merlyn. In a wonderfully varied field are a Chevrolet Camaro and an AC Cobra as well as Jaguar E-types, TVRs and MGBs.

More interesting entries in the Guards race include Gary Pearson, one of Britain’s leading historic racers, in his Lotus 23B and Denis Welch in his spectacularly-driven Austin Healey 3000. Making his race debut will be former sporting trials champion Ian Wright, who will share the Lotus 23B of Martyn Halliday.

In the opening round of the Historic Touring Car Championship, American V8s will head the field with Mike Gardiner’s Ford Falcon taking on the Ford Mustangs of Richard Dutton and Warren Briggs. With a packed grid of Lotus Cortinas, Mini Coopers, Hillman Imps and Ford Anglias, it will be another highlight race featuring battles all down the order.

With more single-seater action from two races for the Millers Oils Formula Junior UK Championship and the first round of the HSCC’s Classic Racing Car Championship as well as rounds of the Historic Roadsports and 70s Roadsports Championships, it promises to be a great start to the 2013 season.

After qualifying from 9.10am, the first of eight races will start at 13.10. For more details about the HSCC, please visit www.hscc.org.uk