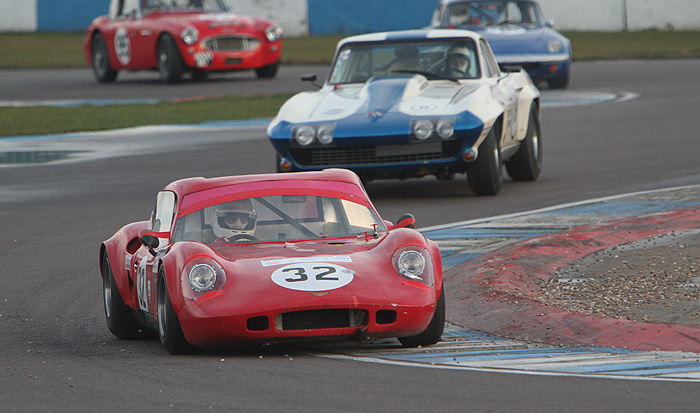 The Historic Sports Car Club got the 2013 historic racing season off to a flying start at Donington Park (Sunday 17 March) with some great racing and bumper grids as more than 250 competitors got their racing season underway.

On a day that also celebrated the 80th anniversary of the earliest car racing at the East Midlands venue, a thrilling Guards Trophy race brought the curtain down in style with a result that was only decided on the final lap after a flat-out 40-minute contest.

In a race of changing fortunes, the Chevron B8s of Luke Stevens and Charles Allison were the key players and Stevens fought back from losing time behind a safety car to re-take the lead from Allison. However, cruel luck struck the Newmarket racer when a plug lead became detached going into the final lap and, with his car struggling on three cylinders, he was powerless to stop Allison sweeping ahead two corners from home.

Former champion Nelson Rowe returned to Historic Formula Ford in style to beat a quality field in his Crossle 20F and reigning champion Ian Jones took another Classic Racing Car Championship victory in his Lotus 59. With an entry of more than 50 cars, the Formula Junior pack was split into two races, with wins going to Sam Wilson (Cooper T59) and Stuart Roach (Alexis Mk2).

Two excellent Road Sports races delivered strong grids and battles all the way down the field. The winner were Julian Barter (70s Road Sports) and Frazer Gibney (Historic Road Sports). However, Gibney only pipped fellow Lotus Elan racer Roger Waite by eight-tenths of a second after a race-long contest.

The HSCC season continues at Thruxton over the Easter Weekend (30/31 March) with a record circuit entry for the inaugural Thruxton Easter Revival meeting.