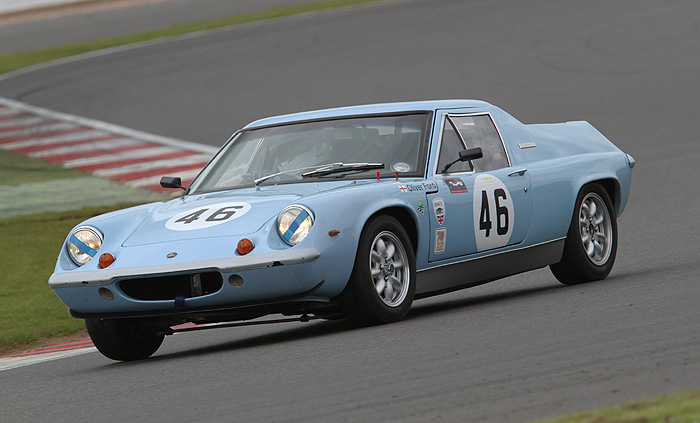 The final two 2013 champions from the Historic Sports Car Club were crowned during the club’s closing race meeting of the season at Silverstone on Saturday (19 October), with Tim Davies and Oliver Ford wining the Historic Touring Car and 70s Road Sports Championships respectively.

Davies clinched the Historic Touring Car title two years after ending a 22-year lay-off from the sport. The former F3 racer is now 61 and came back to racing in 2011 with a Lotus Cortina he spent more than a decade building up. “I always said I wanted to do something before I got too old,” said the Lampeter driver, who ended his single-seater career in 1988.

Davies took another class win at Silverstone to come out on top in a season-long battle with ace engine builder Neil Brown, who could only take second in class to race winner Mark Jones in a battle of the Lotus Cortinas.

Meanwhile, a class-winning fifth place in the rain secured the 70s Road Sports title for Lotus Europa driver Oliver Ford. On a slippery track, Ford drove a measured race to make sure of the class win that he needed as rival Julian Barter (TVR 3000M) also won his class by finishing second overall to the Ferrari 308GTB of David Tomlin.

On a day of great racing in changing weather conditions, the closest finish came in a fabulous Historic Formula Junior race as Andrew Hibberd beat Sam Wilson by less than a tenth of a second on a drying track, with Simon Diffey right with them as the three Lotuses took the flag.

Not to be outdone, in the Historic Formula Ford 1600 Championship round 18-year-olds Callum Grant and Ben Mitchell were split by only 14-hundredths of a second at the flag. 2012 champion Grant just got a whisker ahead of 2013 champion Mitchell after a thrilling contest. It was almost as close in the battle for third as Josh West pipped David Wild by less than a quarter of a second.

Remarkably, a third race was decided by a fraction of a second as Roger Waite (Lotus Elan) headed Bruce Stapleton (Morgan +8) by 0.224s in the Historic Road Sports race, which featured a superb 34-car grid.

The HSCC Championship Finals Meeting was once again a fitting finale for the 2013 championship season for the club, with an entry of over 250 cars and close racing all down the fields.