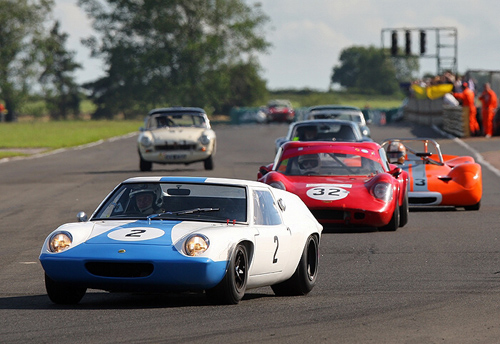 The third running of the Croft Nostalgia Weekend (3/4 August) has been judged a big success as the Historic Sports Car Club ran the 16-race programme at the North Yorkshire track.

Close racing, good grids and a wonderful retro atmosphere made the event a big hit, both with the drivers and the thousands of local fans who came along to enjoy the weekend.

“The stand-out meeting of the year so far for me,” said historic racing ace Simon Hadfield, who took his Lotus 47 to victory from a capacity grid for the Guards Trophy race. Driving the rare Lotus for the first time for several years, Hadfield marked 30 years of racing with the HSCC by seeing off the Chevron B8 of Charles Allison and the Lenham P69 of John Waggitt.

In his Lotus Europa, the road-going version of the 47, Oliver Ford moved closer to the 70s Road Sports Championship title with two narrow wins over the TVR 3000M of Julian Barter. Meanwhile, Peter Shaw maintained the Lotus successes by taking his Elan to a brace of wins in the Historic Road Sports races.

Another champion-elect is young Sam Mitchell in Historic FF1600 and he swept to two commanding wins in his Merlyn Mk20. In the Historic FF2000 pack, reigning champion Nelson Rowe (Reynard SF79) took two more wins, but was run close by Andrew Park (Reynard SF81) and Callum Grant (Delta T78). Another double-winner was Jonathan Hughes (Brabham BT6) in the Formula Junior races, but Jack Woodhouse (Lotus 20/22) pushed him very close in the opening race.

Among the on-track stars was Yorkshireman Dean Forward with his Tecno, which proved the class of the Historic Formula 3 field. In the opening race he went from last on the grid to victory and later added another win. Just as in 2012, Forward was in unstoppable form and this year he was racing his Tecno for the first time. Meanwhile, Peter Thompson, Leif Bosson and Jim Timms all scaled the podium during the pair of races. The earlier story of F3 was marked by a race for the 500cc cars, which was won by the Cooper Mk10 of Steve Jones.

The HSCC season will continue at the Oulton Park Gold Cup on the August Bank Holiday weekend (25/26 August).