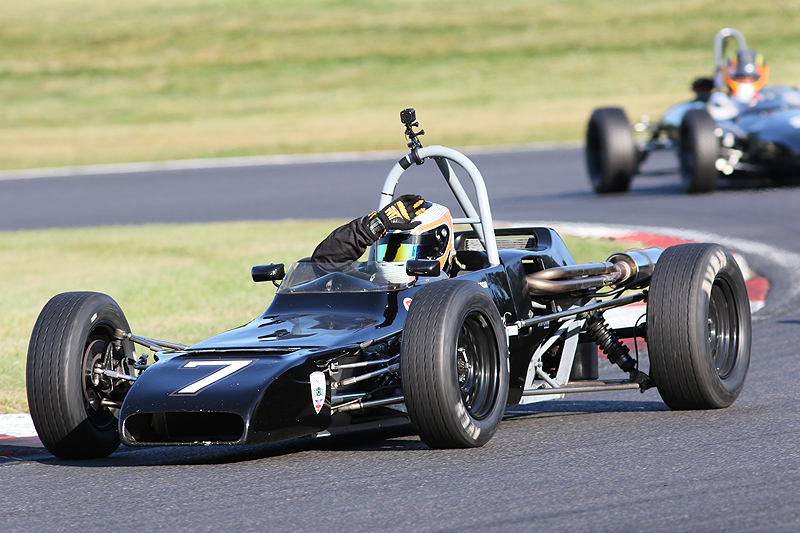 Though Jackson was twice headed by Richard Tarling in Historic Formula Ford, he was still able to clinch the title with two second places. “I don’t mind losing to Richard, he’s always quick and he’s a very good driver and good fun to race with,” said Jackson.

Meanwhile, a double win assured Langridge the Classic F3 title. “I wanted to win the title by winning races,” said Langridge after an excellent day. However, it was down to hard work by Dan Eagling’s Lifetime Racing as an oil seal failed in testing on Friday and the team had to take the gearbox out to sort the problem.

The pair of 70s Road Sports races were tremendous as five cars contested the lead. In the opening race, Charles Barter managed to work his Datsun 240Z to the head of the pack as Dave Karaskas, with brake issue from qualifying resolved, had his best race in the championship so far to take second in his TVR 3000M. John Williams (Porsche 911), championship leader Jeremy Clark (Lotus Elan) and Mark Leverett (Elan) made up the rest of the closely-matched pack.

For the second race, Leverett handed his Elan to his son Will as Will’s Lotus Europa is awaiting an engine rebuild after problems at Oulton Park. Leverett started from the back of the grid and flew up the order to catch the battling lead pack. He then picked off his rivals one by one and scored a famous victory. “I’ve never started last and won before: it was an amazing race,” said Will.

The fast-starting Williams thought he’d done enough to make sure of victory until the white Elan appeared in his mirrors, while Karaskas took third from Clark, who lost a little time with a spin at Graham Hill Bend, and Barter parked the 240Z with more engine woes. 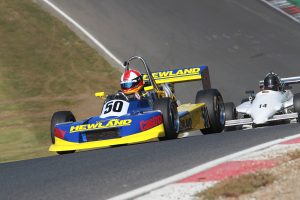 In the opening Classic F3/Classic FF2000 race, Langridge was under constant attack from Steve Maxted (Ralt RT3) and it got just too close when Maxted bent a front fin against the back of the March under braking for Druids. Two laps later the fin came off completely and the hampered Maxted slipped back into the clutches of the battling RT3s of Paul Smith and David Thorburn. Maxted held on, but worse was to come in the second race.

While Langridge fired into the lead, Maxted stalled on the line and spent the race fighting back up to third on Smith’s tail. Once again, Thorburn had shadowed Smith for much of the race until Maxted arrived on the scene. However, victory and the title went to Langridge. “It feels good, but I got a bit lucky as Steve managed to help me out,” said the new champion.

Ben Stiles twice blitzed the FF2000 pack to move a step closer to sealing the URS crown but in both races had to overcome Nelson Rowe (Reynard SF79) to be the best of the FF2000 runners.

Just as he had in June, Tarling returned to Historic FF at Brands Hatch to give Jackson a hard time. In both races, the Jamun got off the line best and despite two relentless pursuits by Jackson, Tarling made it three wins from three starts.

In the opener, re-started after a spinning Clive Richards was unavoidably collected by Simon Toyne at Graham Hill Bend, Jackson really had his hands full as Linton Stutely made it a three-way lead battle in his Royale. Later in the race, time lost to backmarkers cost Stutely a shot at moving up, but he was closing back on the leaders at the flag.

A broken engine mount sent Stutely to the pits early in the second race but Jackson didn’t have it any easier as Pierre Livingston went with the two leaders. “I sat behind Richard to defend from Pierre when I should probably have had a go to overtake Richard,” said Jackson who duly sealed his second title as Tarling won again.

Andrew Park took a double win in Historic FF2000 to close in on a fourth straight title. Ian Pearson was the big threat to the Cumbrian but was fortunate to retain second when the first race was red-flagged just after he’d had a wild ride through the gravel at an oily Paddock Hill Bend. Park had a slightly easier time in the second race as Pearson countered concerns about his clutch to lead the chase while Nelson Rowe again completed the podium. 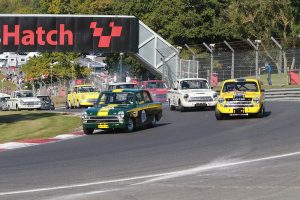 Mark Martin (Lotus Cortina) clinched victory in both Historic Touring Car races but left it late in the second race after passing Richard Belcher at Clearways on the final lap when the former leader went in just too deep. “I didn’t think that through,” said Belcher. “I just went into Clearways a bit too quick,” he added after withstanding considerable pressure until the final corner of the race. Roger Stanford (Lotus Cortina) went after the two leaders in both races as good battles rages all the way down the pack.

The Cosworth turbo-engined Escort Mk2 of Terry Davis won both Ford Escort races in style. Unfortunately, a first corner tangle in the opening race sidelined two cars for the rest of the day. Behind Davis, Mark Freemantle and Stephen Primett had two mighty contests which went to Freemantle but in the second race Jonathan Miles joined in the fun and split them as three cars crossed the line covered by a third of a second.