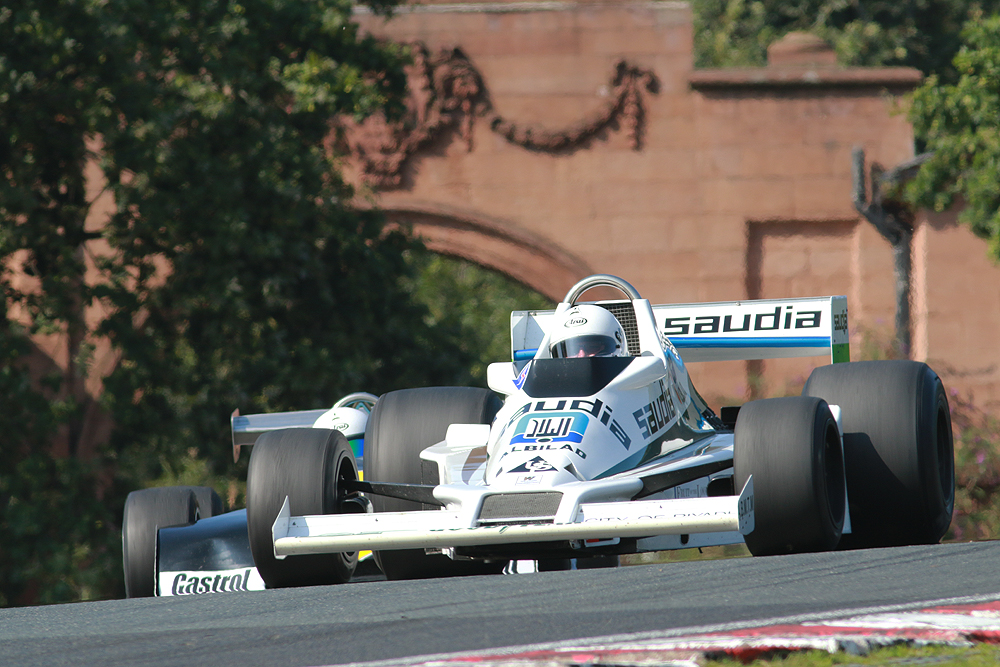 In the best tradition of the Gold Cup, a former Grand Prix car won the feature race as Australian racer Marty Bullock triumphed in his ex-Alan Jones Williams FW06. Bullock was aggregate winner across the pair of XL Aurora races in the car last raced at Oulton Park in 1979 when Giacomo Agostini finished sixth in the Gold Cup.

In the opening race, Jamie Brashaw (March 73B) fended off his friend and rival Mark Dwyer (March 742) to win in the spectacular Formula 5000 car. However, at the start of the second race they tangled wheels at the first corner and were both out, so Bullock set the pace under constant pressure from the Chevron B25 of James Murray. Despite the determined efforts of Murray in his ex-Peter Gethin Formula 2 car, Bullock held on to take a popular victory in the superbly presented F1 car. 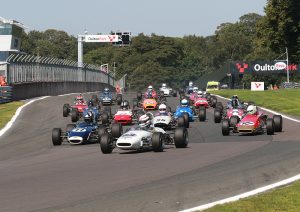 An incredibly close finish in the second Historic Formula 3 race was another of the highlights of the weekend. Sunday’s double-header for the 1-litre Formula 3 provided two classy wins for Andrew Hibberd in his ex-Chris Irwin Brabham BT18 but the action behind him was stunning. At the end of the second race a blanket finish put Christoph Widmer, Andy Jarvis and Peter Thompson three-abreast over the line, covered by just 11-hundredths of a second.

As Jarvis struggled with fading tyres, Widmer just managed to get the nose of his Brabham up alongside Jarvis’s March as Thompson went to the left of the track in his Brabham to make it three-abreast. An elated Widmer won the sprint to the line to finish his 100th race in style. “It was incredible,” said the Swiss racer. “I was in the middle with a blue nose either side!”

Hibberd was a useful 13s clear at the flag to back up his victory in the opening race when early leader Enrico Spaggiari (Lotus 41X) and Jarvis shared the podium places after more fine battling.

The Formula Juniors also thrilled Sunday’s audience with a tremendous second race. In the first race Andrew Hayden took his debut Junior win by a useful margin once Peter de la Roche was forced to retire his front-engined Lola Mk2 with failed driveshaft bolts. The similar car of Michael Hibberd made it a one-two for the Hibberd team.

After a frantic rush to fix the Lola, de la Roche made it to the grid for the second race with just two minutes to spare and joined Robin Longdon (Lola Mk5A) and Hayden in a tremendous lead content that went to local racer Longdon as only nine-tenths of a second split the trio at the flag. 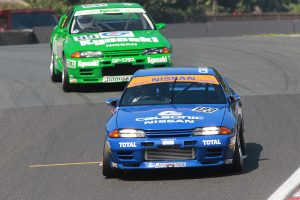 Stewart Whyte topped both entertaining Dunlop Saloon Car Cup races in his Honda Accord from a varied and spectacular grid. In both races the cars of Ric Wood featured as on Sunday BTCC racer Jake Hill made fine progress from the back of the grid in Wood’s Nissan Skyline until a misfire developed and he sensibly retired the car to the pits. Meanwhile, Wood charged his Holden Commodore from a pit lane start up to second despite losing the power steering fluid mid-race. Mark Wright gave exuberant chase in his Ford Sierra RS500 and completed the podium before chasing Whyte home on Sunday as Wood switched to the Nissan. The similar Nissan of Jonathan Bailey completed Monday’s podium for an impressive result on the car’s first race for 25 years.

The half-hour Historic Road Sports race was a close run affair as Kevin Kivlochan’s AC Cobra faced the major challenge of Will Plant in his father Richard’s Morgan Plus 8.

Kivlochan pushed Plant back to second on the opening lap and then went a couple of seconds clear as Plant eased his pace a little to conserve his tyres and brakes. However as the Cobra struggled for grip and brakes Plant closed back in again over the final laps and chased Kivlochan home. Under a second decided the result in Kivlochan’s favour as Roger Lee’s Lotus 7 completed the podium.

The 70s Road Sports pack’s half-hour race proved to be a race of attrition. Kevin Kivlochan was out early with a blown head gasket on his Morgan Plus 8, while early leader Will Leverett soon retired his Lotus Europa. Championship leader Adam Bagnall (Jaguar E-type) was forced out after collecting the spinning Europa of Howard Payne at Lodge, so through came Jim Dean (Lotus Europa) to fend off the ever-present challenge of Charles Barter (Datsun 240Z) and the invitation class Escort RS2000 of Jason Minshaw.

Mark Charteris took another Classic Clubmans double but newly-married Alan Cook made it very close in the second race on Sunday afternoon. Charteris won well in the opening race but in the later race, after a typically steady start, was still second when a mid-race safety car arrived. Finally, on the third lap of the four-lap dash to the flag Charteris edged ahead but the flying Cook chased all the way to the flag.

Mike Lane made a racing comeback more than a year after his Brands Hatch accident to take third place as Clive Wood took a Class B double over arch-rival Barry Webb, who started the first race from the back of the grid after missing qualifying due to an electrical fault. 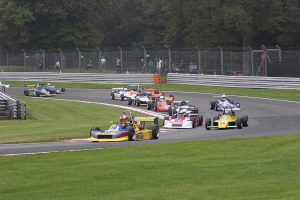 Andrew Smith was the class of the Classic F3/Classic FF2000 pack and took a brace of wins despite some downshift problems on Monday. Steve Maxted and Adrian Langridge shared the podium in both races while Ben Stiles bounced back from a testing accident on Saturday morning to twice win the Classic FF2000 division on his Oulton Park debut.

Having hit engine problems in his Formula Ford 2000 Delta on Sunday, Callum Grant went back to Bolton to fetch his Merlyn Mk20 for Monday and duly took a double win in Historic Formula Ford over Pierre Livingston. Ben Tusting narrowly beat Clive Richards to third in both races as Richards headed Ted Pearson in the Over 50s division.

A late safety car set period up a tense one-lap dash to the flag in the 40-minute Guards Trophy race. In increasing brake dramas, Benn Tilley led into the final lap in his Lotus 23B but could not hold off the Chevron B8 of Charles Allison. Up to third after two spins and an all-action final lap came Ben Rushworth in Paul Ugo’s B8 while Dan Eagling drove superbly in Mark Halstead’s Ginetta G4 to win the GT division after leading the race overall in the early stages.

For most of the opening Historic Formula Ford 2000 race Andrew Park held off the advances of Benn Simms. However, on the final lap the leading Reynard succumbed to clutch failure and Simms, in clutch trouble of his own, swept ahead to win. After a catalogue of dramas, Simms elected to miss the second race, but Park worked flat out to fix his car and started the second race from the back of the grid.

Park stormed up the order to get onto the tail of Ian Pearson, who’d had clutch problems of his own in the first race, as they hunted down early leader Jason Redding. However, Park was out at Cascades when a stub axle failed the front right wheel came off, so Pearson was left clear. However, Pearson then hit gearbox issues and eventually had only third gear, which allowed Redding back ahead.

Peter Hallford (Ford Mustang) won the opening Historic Touring Cars race despite a determined chase by Roger Stanford’s Lotus Cortina. In the second race, Hallford struggled off the line but was helped by a red flag. From the re-start, Hallford made short work of taking control from Stanford and as a late retirement for Bob Bullen (Ford Anglia) allowed Nigel Cox (Lotus Cortina) to complete the podium ahead of Simon Goodliff in the ex-Norman Grimshaw Wolseley Hornet.