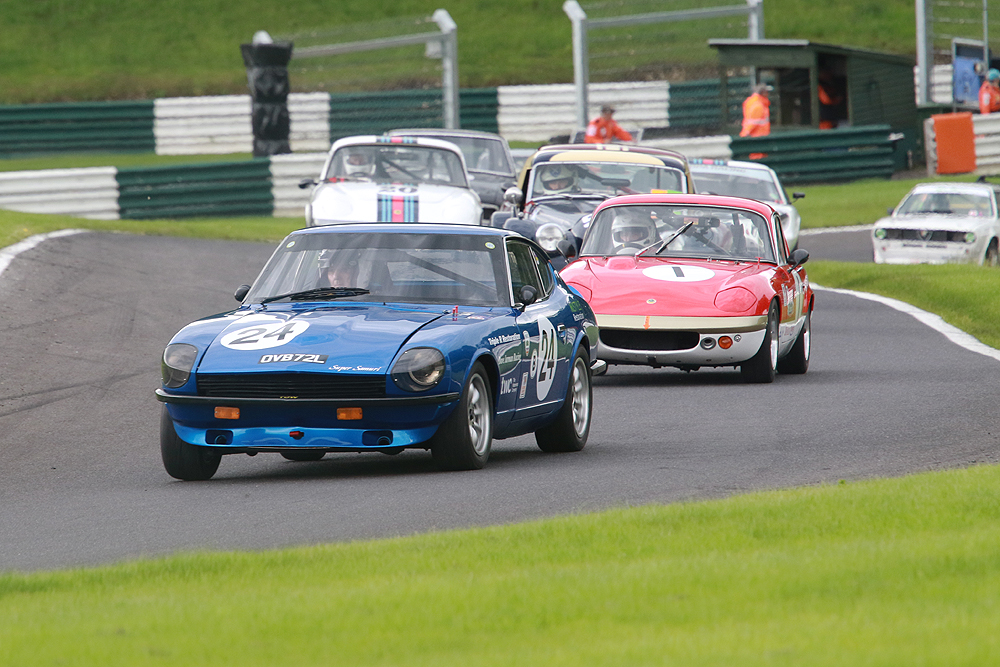 An excellent grid lined up rounds three and four of the 70s Road Sports Championship although the Ferrari 308GTB of John Dickson was missing after its engine ingested a bolt during qualifying. In the build up to the opening race there was frantic activity in the paddock as the cars of father and son Mark and Will Leverett both needed attention. Will’s Lotus Europa had a fuel problem and Mark’s Lotus Elan had clutch issues. However, with help from rival teams, both cars made it to the grid.

In the first race, Charles Barter (Datsun 240Z) was able to ease away from Jeremy Clark (Lotus Elan) although Clark never gave the chase and had whittled the gap down to just over a second at the flag. Kevin Kivlochan brought his Morgan Plus 8 out in 70s trim and completed the podium, but had to be pretty defensive in the face of a gaggle of challengers. Mark Leverett was fortunate not to damage the Elan after spinning into the barriers at Park so it was Will Leverett who chased Kivlochan over the line with Adam Bagnall (Jaguar E-type) close behind.

On Sunday, Barter muffed his start as Clark got away ahead and it took four laps for the Datsun to regain the lead. However, it was far from over as Barter then spun at the hairpin and Clark nipped back in front. It was later discovered that a detached fan belt had caused the 240Z to leak coolant onto a front tyre. Kivlochan was again third, this time from Mark Leverett and Bagnall. 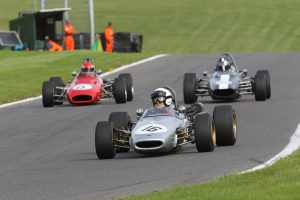 A tremendous field of 1-litre F3 cars looked superb in the Justin Haler Memorial Trophy races as Jon Milicevic (Brabham BT21B) completed an impressive double. However, this was never an easy task for the reigning champion as cousins Jason and Jeremy Timms offered a strong challenge in Brabham BT21 and Chevron B15 respectively. Along with Jason’s dad Jim, they were part of a welcome contingent from the European Trophy and they had excellent pace as they chased Milicevic.

“I switched the fuel pump off accidentally mid-race, but he was pushing me along,” said Milicevic of Jeremy T’s pursuit in the opening race. On Sunday, Jason took up the fight and was a similar distance behind Milicevic at the finish. Francois Derossi wrapped up Saturday’s podium in the face of a dogged chase from Jason T and the French ace was chasing Jason T on Sunday as Jeremy T was edged back to fourth. 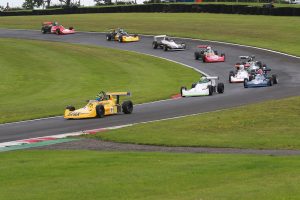 Two Historic Formula Ford 2000 Championship races were rather action-packed and also hit the most changing weather conditions. On Saturday, Benn Simms and Andrew Park had a mighty contest as light rain started to increase and the safety car was then sensibly deployed as most of the field was on slicks. As the rain increased, the race was red flagged and the cars taken back to the paddock. At the end of the afternoon, with a dry track but rain threatening again, the race was re-started.

Over the 10-minute re-run, Simms defended again Park’s challenges but it was very close with just three-tenths of a second between them. A tremendous battle raged for third between friends and rivals Jason Redding and Paul Allen, with Andrew Storer and Matthew Dunne right in contention.

Unfortunately, Sunday’s race also finished early as conditions worsened. A tangle between Simms and Park at Mansfield eliminated Park and delayed Simms, which put Redding ahead when results were taken at the end of five laps. Simms was classified second from Storer, Dunne and Brian Morris.

At his home track, Lincoln-based Cameron Jackson took his winning run in Historic Formula Ford 1600 out to seven races despite the very best efforts of Callum Grant. In the opener, Grant managed to edge in front mid-race before Jackson worked the Winkelmann back into the lead and took the flag with a margin of less than a quarter of a second over the flying Grant.

Cadwell Park newcomer Pierre Livingstone did well to see off Speedsport team mate Ben Tusting for third as Dan Eagling was a strong fifth in his ‘for sale’ Merlyn Mk20. Close behind Eagling, Rob Smith again topped the Over 50s division.

On Sunday, Jackson had rather more breathing space by the flag as Grant had to counter the pursuit offered by Livingstone as Tusting and Eagling were again next up. Rounding out the top six was a good result for Danny Stanzl in his Elden Mk8, just clear of double Over 50s winner Smith.

Kevin Kivlochan and his AC Cobra were the dominate force in the Historic Road Sports Championship. Before qualifying, Kivlochan was concerned that the Lotus pack would give him a hard time around the twists and turns of Cadwell, but the Cobra blasted off the line into a lead that would grow to a very comfortable margin. On Saturday, a gaggle of cars battled mightily for second but, unfortunately, that contest ended in a tangle at Park that took out Mark Godfrey (Ginetta G4) and Jonathan Stringer (Lotus 7) and prompted a red flag. Jonathan Rose (Elan) and Roger Lee (Lotus 7) joined Kivlochan on the podium.

In the second race, Lee drove a strong race to keep Kivlochan on his toes as Rose, Barry Ashdown, Jim Grant and Teifion Salisbury made it five Lotuses in the top six along with the thundering Cobra. 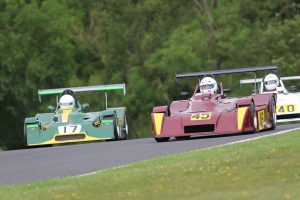 The Classic Clubmans Championship delivered a good entry of the rapid front-engined sports-racing cars and it was series returnee, and now Historic F2 contender, Mark Charteris (Mallock Mk20/21) who dominated the opening race to win by almost 50 seconds, despite a scare when Barry Webb spun just in front of him. Clive Wood and Alan Cook completed the overall podium as Trevor Welsh took the Sports 2000 division with an impressive fourth overall. Tom Dunstan missed qualifying in the Penfold but came through very well in the race to win the Formula Ford-engined class after Webb’s Mallock spun following a moment with a backmarker. Webb was just over half a second behind at the flag.

Charteris was forced to pit and retire from the lead on Sunday as a wheel-bearing failed so Wood took victory from Cook. Welsh moved up to a class-winning third as Webb took his revenge on Dunstan by winning the ‘B’ class by 11 seconds.

Shaun Balfe and Bob Bullen shared victories in the rain-affected HSCC/HRSR Historic Touring Car Championship double-header on Sunday. Balfe, taking the chance to race on his home track, was nicely ahead in the opening race when it was red flagged after Bullen slid into the barriers on the exit of Charlie’s. Roger Stanford and Richard Belcher were second and third as rally driver Peter Smith (father of Le Mans winner Guy) took sixth on his race debut in a converted Lotus Cortina rally car.

Bullen’s crew worked hard to get his Ford Anglia patched up for the second race and their work was rewarded with victory as more rain made conditions difficult. Balfe elected to retire rather than risk the car so it was rainmeister Roger Godfrey who took his Mini Cooper up to second from Michael Sheraton (Ford Anglia).

A pair of sprint races for cars from the Guards Trophy had thin support but rapid youngster Benn Tilley was still hugely impressive as he romped to a double win in his Lotus 23B.

On Sunday, a combined non-championship race for single-seaters from Formula Junior and Classic Racing Cars was won convincingly by the gorgeous Formula 2 Tecno of Day Pyett. Tom Anstiss (Lotus 20/22) was the best of the Formula Junior contingent on his racing debut and duly won the Barry Westmoreland Trophy.