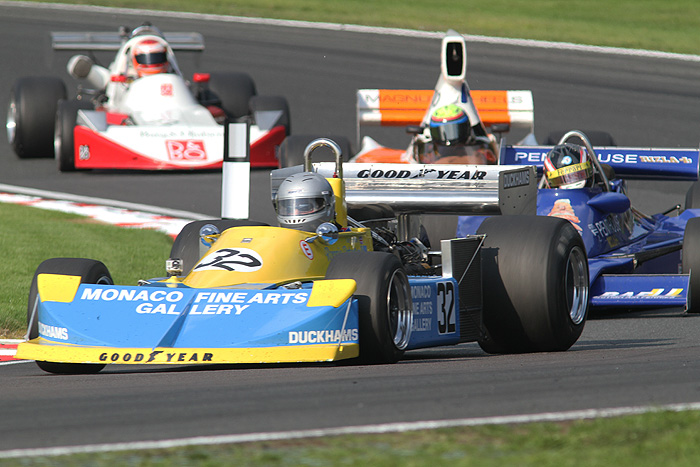 While lots of off-track attractions gave fans a bumper day out, it was the on-track action that really wowed the spectators as around 400 cars in 20 races did battle on the fabulous International circuit.

The best spectacle of the weekend came in the second race for the Derek Bell Trophy and Classic Formula 3 Championship, with up to six cars running in a fantastic lead battle as Formula 1, Formula 5000, Formula 2 and Formula Atlantic cars battled wheel to wheel. Ultimately, Michael Lyons romped to victory, but not before the power single-seaters delivered a stunning spectacle.

The first race was halted early due to an accident involving the Chevron B24 of Paul Campfield. At the time, Greg Thornton was ahead in his F1 March 761 after Lyons had spun down to second in his F5000 Lola T400. With the Lola suffering gearbox problems, Lyons switched cars for race two, taking over the F1 Hesketh 308E raced earlier by his father Frank.

Lyons duly started the second race from the back of the grid while at the head of the race were Neil Glover (Lola T332), Thornton, Mark Dwyer (March 742), Richard Evans (March 79B) and Ben Mitchell (Modus M1). While the leaders battled, Lyons stormed up the order and soon joined in to make it mighty contest. Eventually Lyons battled through the lead pack for a spectacular win as Thornton took second and Dwyer headed the smaller-engined cars in third. Ian Ashley, the 1974 Gold Cup winner, was on hand to present the awards, which included F3 victories for Benn Simms (March 803) and Graham Fennymore (Ralt RT3).

Another fine contest featuring two of the best young drivers in historic racing came in the Historic Formula Ford 1600 Championship. Callum Grant, who was 18 in May, and Sam Mitchell, who is 18 next Sunday, raced wheel-to-wheel for the entire race in a contest of the highest order. Finally, after many changes of lead, Grant won by half a second as Mitchell clinched the 2013 championship title.

As befitted the 60th anniversary event, some famous names were celebrated during the weekend and the John Coombs Trophy for the E-type Challenge was won by Alastair Dyson. Local two and four-wheel ace Stuart Graham was there to present the trophies at the end of the Super Touring Trophy races. James Dodd scored a double win in his newly-acquired ex-James Thompson Honda Accord, while former Gold Cup winner Tim Harvey starred on Monday by taking third in Paul Smith’s Ford Sierra RS500 after starting at the back of the grid.

Dodd also took his Chevron B31 to victory in Monday’s Martini Trophy after race one winner Nick Fleming (Chevron B36) was sidelined by a startline incident. Martin O’Connell (Chevron B8) and Mike Whitaker (TVR Griffith) each took a win in the Guards Trophy races.

From over 50 Road Sports cars, race wins were claimed by Oliver Ford (Lotus Europa in the 70s category) and Justin Murphy (Ginetta G4 in the Historic category). Also on Sunday were Formula Junior victories for Sam Wilson (Lotus 20/22) and Simon Goodliff (Lola Mk2).