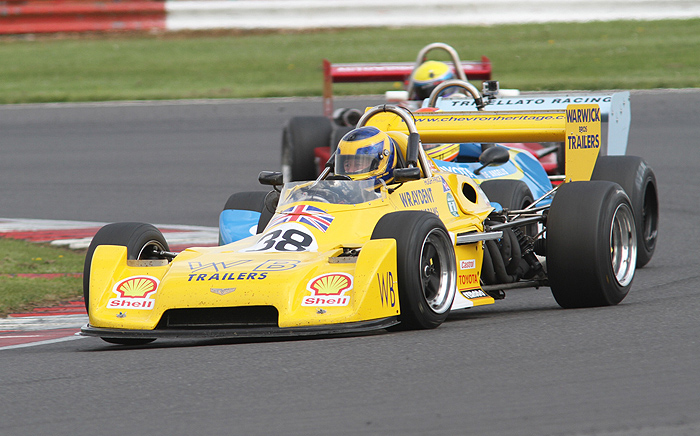 One of the biggest grids in the history of Formula 3 in Britain will line up at this year’s Silverstone Classic (25-27 July) when 40 cars from the 1600cc and 2-litre eras make a fantastic sight on the Silverstone Grand Prix circuit.

The Historic Sports Car Club’s Classic Formula 3 category is one of the new races at the world’s biggest classic and historic racing festival with a pair of races for the 1600cc and 2-litre F3 cars of the 1971-1984 era. The event also marks 50 years since the creation of the modern Formula 3 category for the 1964 season.

The type of Formula 3 cars that launched the careers of drivers like Ayrton Senna, Nigel Mansell, Nelson Piquet and Derek Warwick will make a fabulous addition to the race line-up at the Silverstone Classic. The tremendous grid brings together drivers from the HSCC’s Classic Formula 3 Championship and the corresponding French series.

Among the leading runners are some very significant original cars running in period livery, including the ex-Derek Warwick Chevron B38. The 1977 car is now in the very capable hands of Chevron enthusiast and former Le Mans racer Hugh Price. Meanwhile, former category champion Jamie Brashaw fields his ex-Kenny Acheson March 793 which remains resplendent in the striking colours of Acheson’s sponsors RMC.

Richard Trott raced F3 over 30 years ago as a rising single-seater star and has since returned to the category with the ex-Siegfried Stohr 1978 Chevron B43 while David Shaw regularly races the ex-Nelson Piquet Ralt RT1. However, the highly experienced Derby racer will switch to a March 803B for the Silverstone races.

The earlier Ralt RT1 was also tremendously successful in period and as many as eight of them are in the entry. The RT1 of Angela Grasso is the very first RT1 chassis from 1975, while other RT1s are entered for David Clark, Paul Dibden and Keith Whyte.

Chevron and March were the most prolific manufacturers of the era and more Chevrons are entered for seasoned sports and single-seater racer Richard Piper (B43), Bruce Bartell (ex-Rupert Keegan B34), the rapid Simon Jackson (B43) and recent Le Mans Group C race winner Shaun Lynn (B34). Packing out the March entry are drivers like Adrian Campfield (803), Valerio Leone (783) and Jonathan Price (783).

Meanwhile, two real dark horses will line up in French-built Martinis. The versatile Martin Stretton will race an MK39 for owner Grant Tromans, while former category champion Ian Jacobs will race an ex-Gerhard Berger Martini MK37 he has been rebuilding for the last couple of years. Joining Jacobs in MK37s are Robert Tusting, Eric Martin and Michel Ghio.

Finally, the 1600cc F3 era is represented by David Caussanel (Brabham BT41) and Gareth Walters in his splendid front-engined Mallock Mk11B, built by the late Arthur Mallock and his sons Richard and Ray.