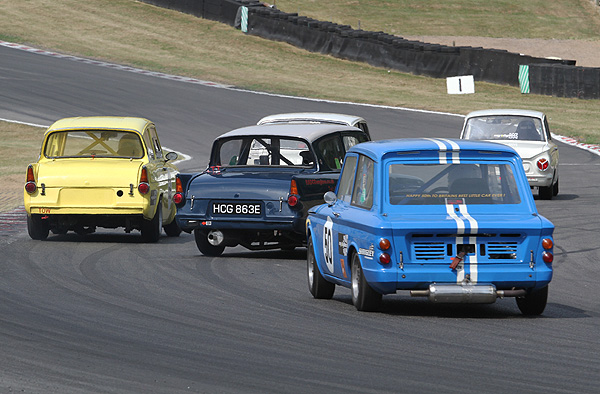 A bumper entry of 220 cars from the Historic Sports Car Club will make up the racing element of the Croft Nostalgia Weekend (3/4 August).

In just three years, the Croft Nostalgia Weekend has earned its place as the leading historic racing festival of the North of England and the on-track action will feature 16 races covering single-seaters sports, GT and touring cars.

Another excellent field will make rounds nine and ten of the ByBox Historic Touring Car Championship one of the weekend’s highlights. While the V8 American muscle cars will set the pace, at the top of the championship is former champion Simon Benoy in his flying Hillman Imp and he goes to Croft with a narrow lead over the battling Lotus Cortinas of Tim Davies and Neil Brown.

Following round seven at Brands Hatch former Formula Junior champion Mark Woodhouse (Elva 100) has a handy 10-point championship lead over the Lotus 18 of defending champion Robert Barrie. Meanwhile, another former champion Jon Milicevic is coming on strong in his Cooper T59 after sitting out the first couple of rounds and has now won four times on the bounce.

Peter Thompson is the man in form in Historic Formula 3 just now after a hard-won victory at Brands Hatch in his Brabham BT21, but drivers like Keith Messer (Vesey), Stuart Tizzard (Chevron B15C), Steve Smith (Chevron B15) and Dean Forward (Tecno) will be strong challengers. Meanwhile, if the expected entry from German racer Roland Fischer is confirmed he will be a leading contender.

Croft marks rounds nine and ten of 13 in the 70s Road Sports Championship and it is Lotus Europa racer Oliver Ford who holds a six-point lead in the overall standings. Making the long trip north from Dorset to challenge Ford will be Julian Barter (TVR 3000M) and his father Charles (Datsun 240Z).

Lotus Elans are likely to make the overall pace in the Historic Road Sports Championship, with the example of Peter Shaw to the fore, although Patrick Ward-Booth (Ginetta G4), Bill Smith (Marcos 1600GT) and Karl Wetherall (Triumph TR4) could all be contenders.

17-year-old Sam Mitchell from Gloucestershire is the rising star of the HSCC’s Historic Formula Ford Championship and goes to Croft with a 30-point lead in his Merlyn Mk20. Driving with ever greater maturity and pace, Sam will be out for a double win at Croft as Benn Simms (Jomo JMR7), David Wild (Lola T200), Simon Toyne (Lola T200) and Will Nuthall (Jamun T2) head the chase in a fabulous 30-car field.

Nelson Rowe is dominating the Historic Formula Ford 2000 Championship with his Reynard SF79, with only suspension failure at Snetterton preventing a clean sweep of wins to date. However, that does not tell the fully story as 18-year-old Callum Grant (Delta T78) has consistently run Rowe close and will be flat out to beat Rowe at Croft.

This will be round seven of nine in the Guards Trophy and it is Jaguar E-type racer Chris Scragg who holds the overall lead after a cracking campaign to date. Those chasing include reigning champion Nick Fleming in his Lotus Elan and father son pairing Michael and Andrew Hibberd in their Lotus 23B. Among the Chevrons, it is Steve Hodges and Charles Allison who should set the pace.

Wrapping up the excellent programme will be a race for the 500cc Formula 3 cars of the late 1940s and early 1950s.